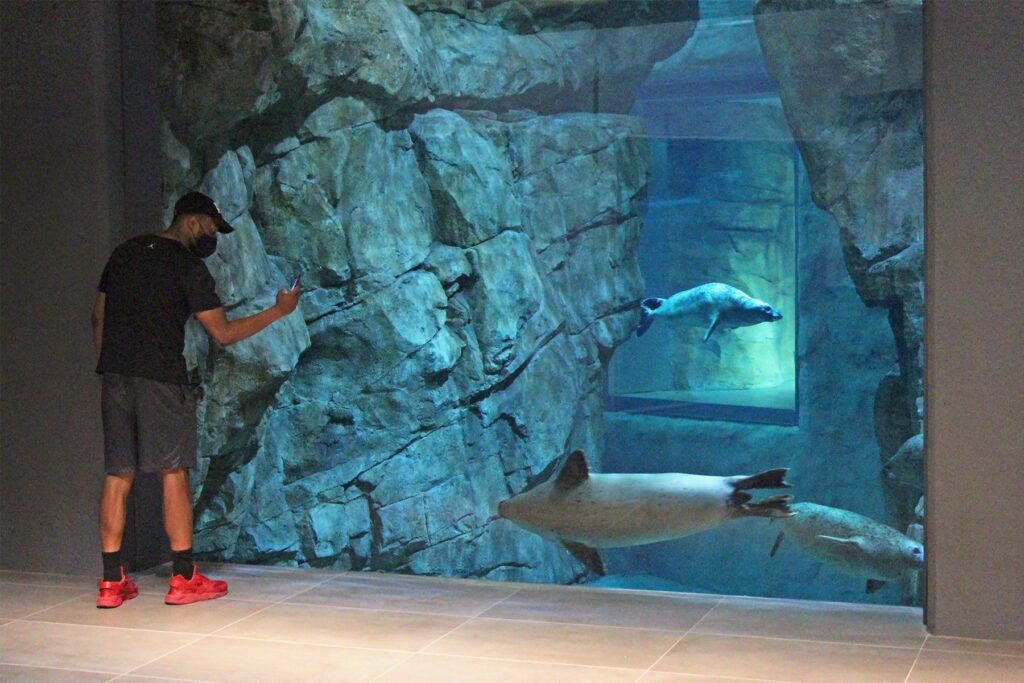 Pinniped Cove is a new 160,000-gallon exhibit for Maritime Aquarium’s five female harbor seals: Tillie, Polly, Leila, Ariel, and Rasal. The L- shaped exhibit is seven times larger than their previous tank and is the aquarium’s largest exhibit project completed in its’ thirty-three-year history. The exhibit allows guests the opportunity to view the habitat from three sides. The space encompasses two levels of the building. The second floor includes above water views that put patrons at eye level with a rustic “fishing shanty” and demonstration space. The ground floor has under water viewing from floor to ceiling. With three daily educational demonstrations, guests can watch the seals take 22 ft. deep plunges to the tank bottom. The underwater rockwork provides the seals areas for exploration.

On June 8th, in celebration of World Ocean’s Day, aquarium patrons were able to preview Pinniped Cove. The state contributed $40 million to this exhibit project which also included a new backstage prep kitchen, full clinic, and a new 4D theatre (which opened in February of 2021).

COST provided engineered shop-drawings, models, and mockups to ensure artistic consistency throughout the project. These construction tools were reviewed and approved by the institution and Seattle-based MIG/Portico prior to construction. Once approved, the COST team mobilized and installed secondary steel and structural shotcrete coats based on the engineered drawings. Finished coats of shotcrete were carved, colored, and aged to replicate coastal rock and earthen embankment textures. The artistic package also included a shotcrete deadfall tree, the fishing shack with cedar shingles and Ipe wood decking, and two decorative wood pilings with faux barnacles which complete the aquarium exhibit.

*Photos courtesy of the Maritime Aquarium of Norwalk