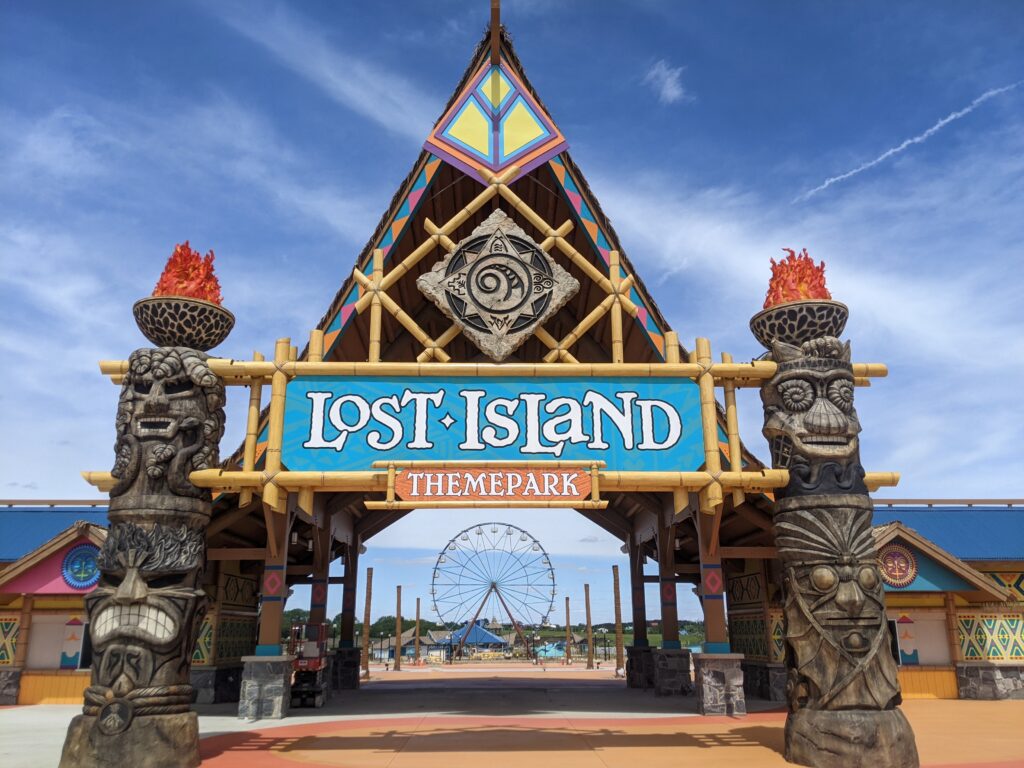 The long-anticipated and highly-secretive Lost Island Theme Park in Waterloo, Iowa opened to much fanfare on June 18th. The park was developed in collaboration with an all-star cast of designers, engineers, contractors, and specialty fabricators. While many theme parks of today lack true theming, the Lost Island ownership team developed their park to include intricately themed lands along with a storyline that will transport guests into imaginative new worlds. Guests are treated to a multi-sensory experience as they embark on their journey through the Lost Island.

The five distinctive lands include Mura (fire), Udara (air), Awa (water), Yuta (earth) and the Tamariki Kids Land. Additionally, the theme park includes picnic areas with pavilions for large groups. Each intriguing land, along with highlighted thematic elements, will be further described below.

As guests drive into the new park, they are greeted by a massive Lost Island sign that is over 36’ feet tall. Artificial monolithic rockwork bases act as termination points for signage structural support. The two-sided static signs measure 25’ wide and rest on artificial rockwork shelving. Further up the sign, guests will get a first glimpse of the ancient icons highlighted by internally lit LED lighting. The icons are “carved” translucent stone panels.

The highly themed entry gates are adorned by a 25’ tall by 36’ long Lost Island entry sign. The ancient stone tiki heads hold the sign in place, as though they have been there for thousands of years. The sculpted glass fiber reinforced concrete (GFRC) tikis include faux heavy iron cauldrons with flame features that reach 3’ in height. The signage follows similar theming as the park entry sign, with theme painted bamboo covering a structural steel system. Anticipation builds as the visitors’ journeys are about to begin.

Once inside the park, guests follow theme way-finding signage that is constructed of simulated rockwork and theme ruins. Each contains signage with thematic paints and embellishments specific to the land it represents. The top of each 8’ structure includes the theme symbol designating the land visitors are about to enter.

The Udara are the keepers of the air, so the thematic palette includes almost cloud like buildings. The Skyborne drop tower ride is surrounded by a white theme plaster-finished building with a rounded, billowy appearance. The preshow area includes an adobe-styled domed structure with a plaster finish. The bright white plaster contrasts with the colored banding that wraps the building. The banding and ancient paintings depict the Udara Kingdom’s story of flight and their many advanced flying machines.

The backdrop for Udara Kingdom is the looping coaster named Napuko. Much like the Udara, guests can experience the thrills of flight on this ride. The Napuko theme follows the drop tower ride building with theme painted banding finishes sand blasted along the building elevations. Whimsical column branches composed of decorative steel, theme painted in white, hold the canopies. Similar artistic banding and whimsical wind chimes accent the building. The plaster finishes and decorative banding were captured in COST’s theme scope. As patrons walk through the lands, they may ask themselves “will the Udara soar again?”

The Awa were known as the keepers of water, their home was a tropical paradise where water, foliage, and island beauty were abundant. The Luau Center is the meeting place where guests experience live entertainment. Greeted by a decorative water feature with a massive 20’-tall decorative steel whale, guests are immersed in a Polynesian-like village with thatch roofs and tiki structures. The fountains and water feature theme finishes were a part of COST’s theme construction scope of services. The Awaati Rapid River Ride along with several other exciting rides and adventures, on land and sea, await guests in the Awa Kingdom.

Once a thriving village, enhanced by the gems and minerals of the earth, the great Yuta Kingdom lay in ruins, devoured by the earth. Theme buildings, composed of ancient ruin finishes, have slowly eroded. Vines and other foliage have overrun the land and only a few buildings remain. The theme plaster ruin walls built block by block by the Yuta (along with COST artisans), help visitors piece together the demise of the Yuta, keepers of the earth.

After much exploring, guests find their way to Yuta Eats, for an abundance of rations that will be needed to continue their journey. Stepping into Yuta Eats, one can imagine the Yuta exchanging stories of adventure and trade with fellow tribes’ people and family. Now the stone ruins along with the sacred tree remain. The stone ruins and buttress tree were composed of shotcrete and plaster applications and carved to resemble the ruins found in Angkor Wat in Cambodia. Artificial vines create the illusion that the building has become one with the jungle.

The Mutagani, as it is known by the Yuta, is a thrill ride like no other. Explorers enter an ancient structure adorned by a sculpted snake finial and a giant 10’ temple viper head before being whisked away by the Mutagani coaster. The building also contains thematic enhancements similar to Yuta Eats, complete with stone ruins and theme paints that are remnants of the once thriving Yuta village.

If guests seek even more excitement, the flume ride is a must-ride attraction. Entering the queue building, a water feature sourced through staggered bamboo channels, tells the Yuta story through stone carvings. Tropical plants accent the rock outcroppings showing the relationship between water and its need to support the plants of the jungle. The water feature, mechanical, and filtration systems, were designed by COST designers working collaboratively with the project architect.

The Yuta Falls flume ride, built by the Yuta to irrigate the land, takes guests on a tour of their lands culminating in a giant drop. Adjacent to this section of the ride lies an ancient 25’ diameter water wheel (theme painted to resemble wood) and sophisticated flume system approximately 60’ tall. The structure was used at one time to distribute water throughout the kingdom. Petroglyphs and carvings cover the artificial rockwork bases and columns that support this massive structure. The centerpiece of this element is the 6’ diameter illuminated oculus. The water falls to the large pool below where it is filtered and recirculated in the mechanical room hidden from view within the rockwork base.

If exploring takes precedence to thrill seeking, a visit to the Pengali Ruins allows visitors access to the remains of the Yuta gem mining operation. Ruin walls and raised platforms, once built to protect the treasures of the earth, have deteriorated, and allow easy access into the commodity-rich sands below. Want-to-be archeologists can dig in the sands to find treasures still left uncovered thousands of years later. The centerpiece is the 12’ square ruin structure completed with wood davits.  Above the 18’ tall structure lies the stone icon, symbolic of the Yuta riches.

The Yuta Falls flume ride water wheel and oculus along with the central plaza structures were designed, engineered, modeled, fabricated, and constructed (including theme and non-themed structural steel) by the COST team. Additional theme scope such as the water wheel, oculus, snake sculpts, wood davits, hidden treasures, etc. were part of COST’s scope of services.

The Mura were known as the keepers of fire, and one of the most prominent elements at Lost Island includes the massive 40’ tall volcano. This would inevitably be the demise of the Mura people. The volcano is the backdrop of what remains of the Mura’s village. Fiberglass/metal muraled mountain backdrops, add to the illusion that visitors are within the mountainous region. The volcanic lava cascades into a central icon water feature, complete with fountains and an interactive storyline.

The volcano’s footprint surrounds the building that houses the dark ride queue and storyline for the ride. The volcano scope included a special effects package that deliver a realistic eruption sequence. The LED lights illuminate translucent fiberglass panels within the volcano to resemble flowing hot lava.

Guests enter the volcano through the theme building façade and quickly find themselves in a new adventure. A cave with volcanic igneous rockwork (composed of theme plaster) lines the queue area with murals depicting ancient treasure, lava plumes, and fire-filled caverns. Stalactites of various sizes are found within the rockwork cave which lead to the dark ride, Volkanu, the Quest for the Golden Idol. This is where explorers will learn more about the Mura’s demise.

The western slope of the volcano serves the Rokava ride. The integrated lava monster sculpt is hardly noticeable within the dark, almost black volcanic rock. However, this changes quickly as the illuminated translucent panels within the rock crevices highlight the unique, but now clearly defined, sculpture. The beast longs to grab unsuspecting explorers with his outreached arm. The programmable lighting system within the volcanic crevices are fully integrated with the Rokava ride.

Outside the massive volcano lies the Makatu Shrine central icon fountain feature. The overall surface area is approximately 50’ in diameter and clad with volcanic rock edging which connects to the main volcano. The center of the fountain boasts a 16’ thematic structure with totem elements and fire emblems, once the gathering place of the Mura. Fiberglass fire sculptures illuminated from below along with internally lit orbs provide a spectacle in the evening hours.

In addition to the theme fabrication and construction, COST was involved in developing the mechanical, filtration, and lighting drawings for this iconic show element. The mechanical included a 1,200 gallons per minute waterfall and 25 fountains within the water feature. All piping, UV sterilizers, pumps, and filters were installed by COST crews. The programming and the interactive show was completed by Weber.

Finally, the Lost Island Theme Park also includes the Tamariki Kids Area, with smaller rides and attractions that cater to young children. Within the landscape areas, children can search for elusive Tamariki sculptures, all with varying brightly colored theme applications. These elements were custom sculpted and cast in GFRC, based on the owner’s imagery. The Lokolo kiddie coaster, Tuka Tumbler Ferris wheel, even the Tamakia playground offer numerous activities for children. An arcade rounds out the Tamariki Land.

COST was selected as the theme contractor for five lands and area development theme and signage work based on their 20-plus year history with the client. Working collaboratively with park ownership, and a world-class design team including Bruce D Robinson and Bleck and Bleck Architects, COST staff developed the designed theme work into engineered shop drawings. During this time, highly detailed physical and computer-generated 3D models were developed for stakeholder review and approval. These models were then used for theme prefabrication and site construction.

The Lost Island Theme Park offers the best in rides, dining, gifts, and other attractions all within a nicely scripted storyline and heavily immersive theme. Park hours, location, and other important information can be found at www.thelostisland.com.  The Lost Island also offers an adjacent water park and KOA Campgrounds for families interested in extending their stay in Waterloo.