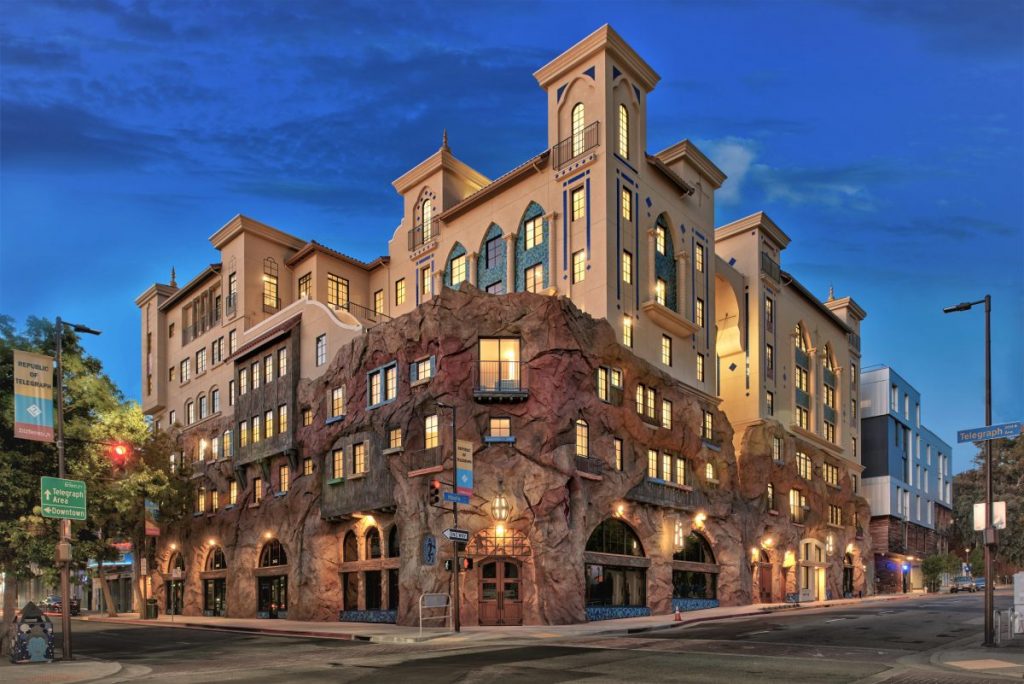 In 2018, West Builders contacted the COST team regarding a very unique artificial rockwork project. The idea was to develop student housing that was unlike any other. The Enclave is a mixed-use (commercial/student housing) project that captures the essence of Ronda, a city nestled upon a cliff in Southern Spain. The Enclave was beautifully illustrated in design perspectives and elevations, but the ideas had to be further developed through modeling to deliver the design intent.

After contracting, the COST modeling and design teams began working with West Builders to deliver a set of engineered drawings and the ¼” scale model of the rockwork façade. The shop drawings and model were presented to stakeholders. The working tools ensured the project’s success from structural (constructability) and aesthetic (artistic) perspectives.

Due to the building’s location in downtown Berkeley, special attention had to be taken to deliver the depth and texture of a rocky cliff but with minimal relief so the artificial rockwork would not constrict pedestrian traffic. Project Manager Alan Bentfield stated, “while we typically use significant relief in our steel to create rock cutbacks and cliffs, we were limited here, so paints and aging techniques were used to deliver the illusion of depth.” Samples were created as a critical step to deliver the look of a cliff, the rock relief, and the multiple colorations that are found on the actual cliffs in Ronda.

After stakeholder review and approval of the shop drawings, model, and samples, the secondary steel and the theme-painted planter boxes, corbels, and shutters were fabricated in COST’s plant. Fabricating these elements prior to mobilization allowed Alan to ship materials to the jobsite using Just-in-Time (JIT) deliveries. This reduced the laydown areas required on a very tight and congested job site. JIT deliveries also provided consistent workflow for our construction crew.

Shotcrete was applied to the secondary steelwork and COST artisans followed the model and samples to sculpt the artificial rockwork textures. In addition to the rockwork, there are three areas where rock terminates into a rustic board finish, composed of a theme plaster coat. Much like the rockwork, the faux wood treatment also required several paint and aging applications to deliver the design intent. Finally, the planters and shutters were also aged to resemble a historic building instead of new construction.

The finished project has broken the stereotypes surrounding student housing and has become an instant icon in the Berkeley area. The Enclave will provide housing to 254 students and include onsite retail on the ground floor, study lounges, a fitness center, and laundry services. The building will be open to new students starting in fall 2020.